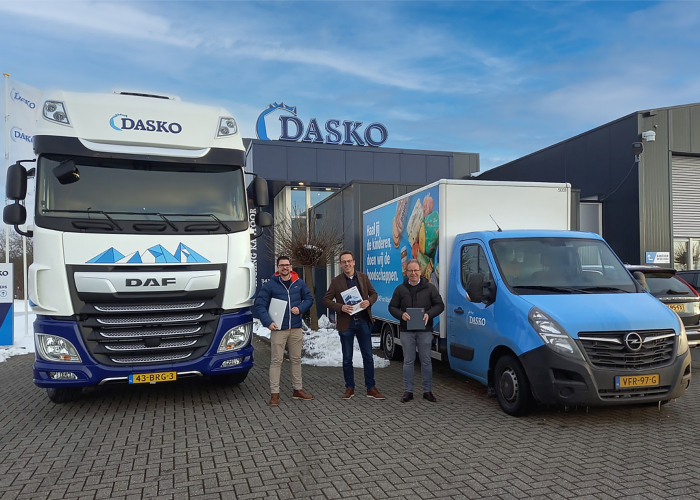 Simacan and Dasko Group, the strongest growing logistics service provider in cooled and frozen transport, have entered into a cooperation to further shape Dasko's 'digital course' by means of the Simacan Platform. This makes Dasko the second large Dutch carrier to connect its entire operation to the platform, and the first to also use this platform for its German clients. As of 1 March 2021 Dasko will use all functionalities of the Simacan Platform.

Dasko Group has been using the Simacan platform for shipping parties such as Ahold Delhaize and Jumbo Supermarkets since the very first moment. The Simacan Platform now allows Dasko to offer transparency to all its clients; before, during and after the execution of the transports and deliveries, without having to provide direct access to its own IT landscape. This means that Dasko's entire operation is combined in one platform. This way Dasko can keep recipients optimally informed of the expected arrival time and quickly respond to any disruptions.

"A number of Dasko's important objectives, such as data security, clear reporting and developments for paperless / e-CMR, can be realised with this move. Dasko is a close family company with customers who have been working with us for a long time. We believe in the triangle 'shipper, platform and carrier' for transparency and to make processes smarter. We will also be given the opportunity to hand out control towers to our clients, such as Aviko and Froneri, who will then be able to watch live during implementation. This should strengthen the good cooperation between Dasko and its clients even more", says Meije Smink, Operational Director Dasko, about the new cooperation with Simacan.

Dasko specialises in national and international transport of food products and transports chilled and frozen products daily at home and abroad. Dasko Group has branches in three countries and as an international employer has more than 550 employees. The company has been doing shop distribution for Albert Heijn for years and, since five years, has been delivering groceries to home for Albert Heijn e-Commerce from its hubs in Almelo and Apeldoorn.

By making optimal use of the Simacan Control Tower, Dasko will be able to execute the complete transport operation from start to finish more efficiently. Applying realisation data from the Simacan Platform also enables Dasko to improve their own organisation's performance, as well as external negotiations.

Simacan Platform for optimisation and cooperation

Simacan enables fast and secure digital cooperation with - and between - transport companies and shippers in order to meet industry-wide challenges such as CO2 reduction, traffic congestion and urban distribution. In addition, Simacan clearly records and presents the transport performance from departure to arrival. This enables shippers and carriers to look for continuous and fact-based improvement and optimisation within the mutual cooperation. Would you like more information about the Simacan Platform or a demo of our Control Tower? Please feel free to contact us.