Albert Heijn and Jumbo about the future of transport 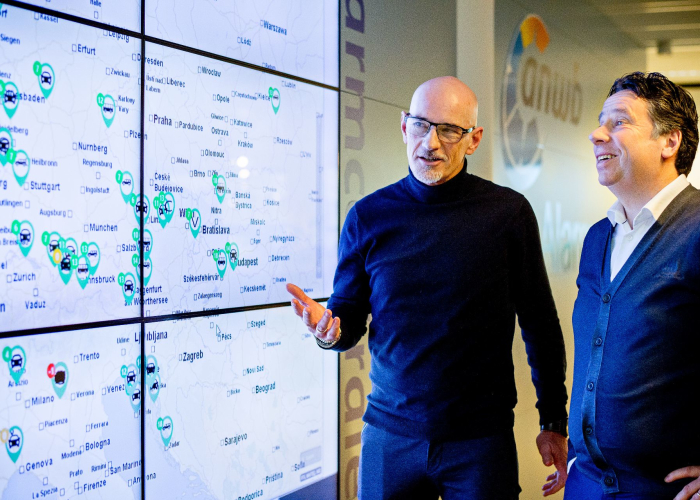 Albert Heijn and Jumbo about the future of transport

Put the supply chain directors of the two largest Dutch supermarkets together and you know one thing for sure: it won't get boring. Certainly not if you invite them to the ANWB's head office and fill-reader Jon Bakker is also present live. A discussion about the future of transport and logistics and the role of digitisation in this:

"We have to get rid of the idea that you always need your own transportation network."

At the beginning of this year, the Traffic Information department of the ANWB counted almost 2,200 kilometres of traffic jams in the Netherlands. Never before had it been so fixed. Snowfall, especially in the middle and east, prevented it from getting through. A day later, Rian Vreeburg, ANWB's director of emergency services, took stock of the record day before. Remarkable: for the Wegenwacht it had been business as usual. "Snowfall makes people drive more carefully," explains Vreeburg. "Not snow, but frost leads to bad luck, due to frozen batteries."

On the morning after the record files Karel de Jong and  Tony Vendrig are guests at the ANWB. Both are Director Supply Chain, De Jong at Jumbo, Vendrig at Ahold Delhaize / Albert Heijn. A visit to the Traffic Information department gives Karel and Tony the 'child in a candy store feeling'. Here '24/7' information about the situation on the national road network is shared via various platforms, from radio and Teletext to the Internet. Crucial information for the supply chain, because shops need to get their stock on time.

Traffic jam update
"Is Jon Bakker there?", Vendrig asks. Indeed, the man who just slipped into a mini studio to give Radio 2 listening Netherlands a file update, is Jon Bakker, colleague of other well-known voice icons such as Heleen de Geest, Cees Quax, René Passet and Yolanda van der Velden. The day after the traffic jams rose to - for the time being - lonely heights, John has few details to report, apart from an overturned truck on the N305 between Almere and Dronten and an accident at junction Galder.

Arnoud Broekhuis, manager of the Traffic Information department, zooms in on the current situation around number 17 from the traffic jam top-20 on a large screen: "Here you can see exactly the speed at which cars are currently driving at the junction: a maximum of 50 kilometres per hour. You can also see the extra travel time it gives drivers there".

Simacan Control tower
Simacan brings together data from the National Road Traffic Database and TomTom and shares it with customers. ANWB uses this data to issue enriched traffic messages, while Ahold and Jumbo use this information via Simacan to plan and monitor the supply of their stores as efficiently as possible. Via Simacan's Control Tower, they have access to accurate delivery information and all links in the logistics chain can be continuously provided with up-to-date data. The announced snow of the previous day did not lead to too much logistic misery. Of the approximately 1,000 stores Albert Heijn has in the Netherlands in Belgium, three were ultimately no longer able to be supplied. Jumbo also ran into major problems, even with home deliveries. Karel de Jong: "My wife had ordered groceries and a parcel was to be delivered. Jumbo drove in on time, but the parcel deliverer called.

More manageable
Digitisation has made the logistics process of both supermarkets much more manageable. Whereas trucks used to disappear more or less from the radar after leaving the distribution centre, the logistics chain now has continuous insight into and control over all journeys from A to B. The question is what else digitalisation will offer both shippers in the future. Both De Jong and Vendrig have their thoughts on this:

Efficiency
De Jong: "I am glad that our trucks are not made of glass. Sometimes they are fully loaded, but there are also half-full of them. Or worse. As shippers, we all use the same road network, connect to the same traffic jams and bypass road closures via the same diversions. I expect that thanks to digitisation we will get a lot more exchange between shippers. Simply because transport is a commodity for us. Transport does not give us a competitive advantage and neither does Albert Heijn or Dirk van den Broek. However, we do have to arrange it properly, because otherwise it puts us at a cost disadvantage, i.e. at a competitive disadvantage. But I think we should slowly but surely move away from the idea that you should always use your own transport network to bring things from A to B."

Vendrig: "I agree with you. Research has been done into the efficiency of taxi transport in New York. Conclusion: if you link supply and demand properly, you can reduce the number of taxis by thirty percent. In our world, too, we can drive much more efficiently. Now we cut the planning into boxes and build in margins per box for unforeseen circumstances.

With factual digital information we can get a lot of waste out of it and we can drive fuller cars and flexible combinations. We prefer not to connect in the morning rush hour. At the same time, municipalities often say: you can unload between 7 and 9. That's good, I think, that's how we create traffic jams. But suppose our drivers are allowed to unload after 9 o'clock, then I can promise two things. One: if we say that we'll be there at a quarter past 9, we'll arrange it in such a way that we'll actually be there. And two: I guarantee that we will come with a clean car and that the driver is trained to manoeuvre safely through the city. We'll be out of town at a quarter past ten. I notice that municipalities are more and more open to this. This also applies to unloading at six in the morning, with a silent truck equipped with cameras instead of reversing beeps".

De Jong: "... And with a driver who turns off the radio while unloading. By the way, Über is an example of an innovative development from which shippers can learn. Apart from the discussion about safety, Über has introduced a new logistics model that is purely data-based. Cars are used on the basis of variables such as demand, location, desired delivery time and quantity. We can learn from this. What matters to us is that the lorry has to reach the store on time, whether it's a car of our own or a lorry from another network. By linking networks based on available information, we can drive much more efficiently. Incidentally, this is already happening on a small scale. For example, there are trucks that first do a ride for Ahold and then pick up a ride for Jumbo. Thanks to digitisation, we can go much further towards central control".

Platooning
Vendrig: "Platooning is an interesting phenomenon, because our trucks drive a large part on the motorway. Then platooning is an option to save fuel and ensure a better flow of transport. I doubt whether it will bring much immediate benefit to the driver. He really can't sit quietly in the back seat all of a sudden. I have a lot of contact with Delft University of Technology, which is active in robotics. Their analysis is that platooning is certainly not going to help us for the next ten years".

De Jong: "The question remains: do we find a self-propelled 18-metre-long truck socially acceptable? I don't see that yet. I do think that digitisation can help to link passenger cars to each other more efficiently. If they automatically adjust their speed to each other, there will soon be no more traffic jams and Jon Bakker can retire early".

Smart algorithms
De Jong: "I fully integrate up-to-date traffic information and weather forecasts into our planning. At the moment, we sometimes arrive at a shop too late, while our planning based on digital data should allow us to arrive on time. So there's something else there. In the future, thanks to ever smarter algorithms and a self-learning planning system, we will be able to predict what time you will be a week in advance. If you are too late, it is possible that a shelf becomes empty. It interacts like this. I love people and it's out of love for them that I think we can't leave the planning to them."

Vendrig: "In our distribution centre in Geldermalsen there is a club of people who are busy adjusting schedules on a daily basis. They make interventions based on up-to-date information. The question is: can we measure the quality of the intervention afterwards? Was it a good decision or should we have done something else or nothing at all? Algorithms will soon be so smart that they will take over that task completely. And the driver? He gets in and is sure his working day will be over at 5:00 in the afternoon."

Original Dutch text: Jeroen van den Nieuwenhuizen
Published on Logistiek.nl
-
More about Ahold Delhaize and their use of the Simacan platform.
Read more about Jumbo and how they use the Simacan solutions.