From pennant to traffic jam news 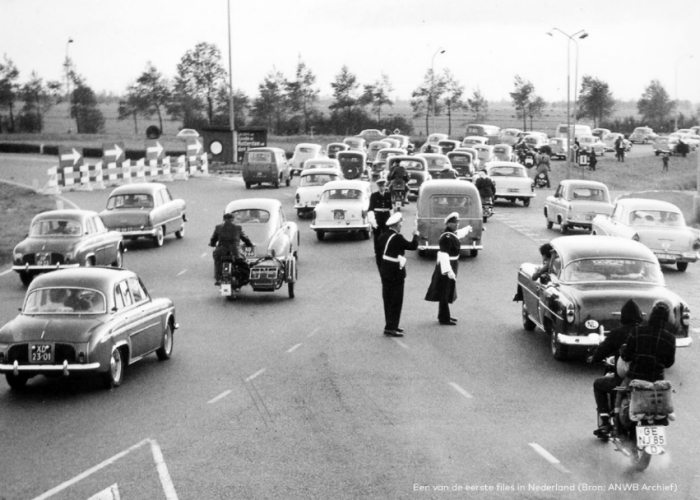 From pennant to traffic jam news

Arnoud Broekhuis is Traffic Information Manager at the ANWB. He sketches the history of traffic jams and traffic information.

The time that the Road Guard stood along the road to warn the road user with a pennant for local slipperiness or a treacherous fog bank is far behind us. So were the frequent calls to thirteen roadside assistance stations about the weather conditions and situation for traffic; the officer on duty at the road assistance station had to use the mobile phone to ask the road assistance officer in his car about the situation at the scene. Other sources were police forces, filling stations, barracks watch commanders and border posts. All of these people's findings were completed, mapped out and shared with KNMI, which in turn formulated a traffic warning and sent it by telex. We still carry out this activity, but now via direct communication with the roadside guards. Thanks to ICT and communication technology, we can see where the roadside guards are located. This means we always have the most up-to-date situation on Dutch roads.

"If we had a 'traffic jam suspicion', we asked the telephone operator of Wegenwacht to listen to the talking posts. The sound of slowing down car wheels gave us an image of the tail of the traffic jam."

First traffic jam on Whit Monday in 1955 The phenomenon 'traffic jam' is now more than sixty years old. On Whit Monday, 1955, German tourists and Dutch road users met each other on the A12 at junction Oudenrijn. As mobility and car use increased, the likelihood of traffic jams also increased. As traffic jams increased, so did the need for information about them. This was not always easy, especially when the weather was bad. The unpredictability of traffic jams made them difficult to detect. Moreover, sources and means of communication were limited. In order to still have an overview of the situation on Dutch motorways, the Wegenwacht and the Algemene Verkeersdienst from Driebergen patrolled the area. Of course, there were far too few police-Porsches to continuously monitor all the roads. Especially for the underlying road network.

Other sources of information were the petrol stations and even the talking posts. If we had a 'traffic jam suspicion', we asked the telephone operator of Wegenwacht to listen to the talking poles. The sound of slowing down car wheels gave us an image of the tail of the traffic jam. We then called the nearest petrol station on the other side of the highway. We asked the desk clerk to ask their customers if they could confirm this traffic jam and if they had seen what caused it. We then asked the Roadside Guard or police to take a look.

Together with TomTom and Simacan
The 'daily' traffic jams at fixed bottlenecks date back to the late 1970s. At that time, the first structural traffic jams arose in our country due to commuting; the morning and evening rush hour made their appearance. It was also at that time that the first traffic signalling systems were developed; this enabled us to warn road users about traffic jams. The loop systems that, among other things, detect the speed of traffic have been installed on many parts of the motorway network. Unfortunately, these 'loops' were not everywhere. So it's good that we have been using TomTom's floating car data since 2015 and Simacan is processing this data in all our systems. Since then, we have been able to measure delays everywhere and inform road users about them. This has significantly improved the quality of traffic information for the whole of the Netherlands.

More about ANWB and how they use Simacan