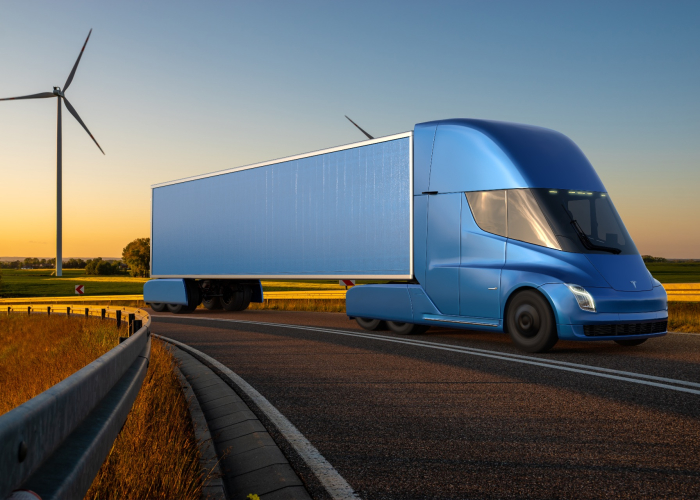 One of the most important reasons for transport companies to want an 'autonomous driving truck' is the increased traffic safety it will provide. Besides sustainability, road safety is one of Simacan's spearheads. That is why we closely follow the developments concerning self-driving trucks and are already taking into account future adaptations to be implemented on our platform. What exactly do these autonomous vehicles entail? What is the added value? And is the Dutch transport world ready for this? Simacan has researched this matter for you.

In recent years, much has happened in Europe in the field of autonomous driving. Mostly, this involves testing this new mode of transport on closed routes, in a few cases also on public roads.

Autonomous driving of trucks in particular has also been a topic of discussion for years, but often it remained a futuristic vision: trucks without human drivers that quickly and efficiently controlled road transport. However, this rather improbable image now seems to be becoming reality. Although they cannot yet do without human supervision, the first self-driving trucks have been spotted on European public roads.

Autonomous trucks in the Netherlands

Transport companies in the Netherlands are also watching the developments in autonomous transport with interest, especially in the areas of efficiency through driving autonomy, cost reduction (personnel and fuel) and increased road safety. In an autonomously driving truck, human errors are reduced to zero: no more over-tired or distracted drivers who can make estimating or operating errors. In the Netherlands alone, an average of 17 trucks are involved in an accident or breakdown every day.

But before autonomous vehicles can have a positive influence on driving safety, they must first be extensively and carefully tested. Because only if they don't make any mistakes, they can increase traffic safety.

In electric trucks, autonomous driving allows better use of the battery because it drives at a more constant speed. As a result, the battery needs to be recharged less often and the truck has to stop less often.

Ideally, the future autonomous trucks will drive from hub to hub at night. That gives less chance to disruptions because there is simply less traffic then. In combination with alternative fuels or drives, this means a significant reduction in both traffic noise and emissions.

A simple cruise control as we all know it and a fully self-propelled truck are both examples of autonomy. In order to distinguish between the different forms of autonomy, 5 levels of self-driving transport have been drawn up by the American institute Society of Automotive Engineers (SAE):

Such a completely autonomous driving vehicle at level 5 is not the ultimate goal for most manufacturers. Most developers focus on level 4. Full driving automation, level 5, without human intervention and even without room for a human driver, is not even possible at this moment. The European infrastructure has not yet been adapted to this. In addition, all kinds of laws, rules and regulations still need to be established. However, there are already semi-autonomous trucks.

Thanks to all the innovations mentioned above that are currently being developed for self-driving vehicles, all kinds of driving-support functions are already available for the current generation of trucks. These include adaptive cruise control, automatic route planning and engine management systems. But of course there are already possibilities for autonomous steering and cameras that replace the mirrors.

The Simacan Platform continues to develop and respond to new technologies and innovations, including the future autonomous driving of trucks. But even now, it is possible to control the road safety of your transport, work cost-efficiently, increase your visibility and manage expectations with the Simacan Control Tower. Do you want to know how? Please contact us for more information or a demo without any obligations.