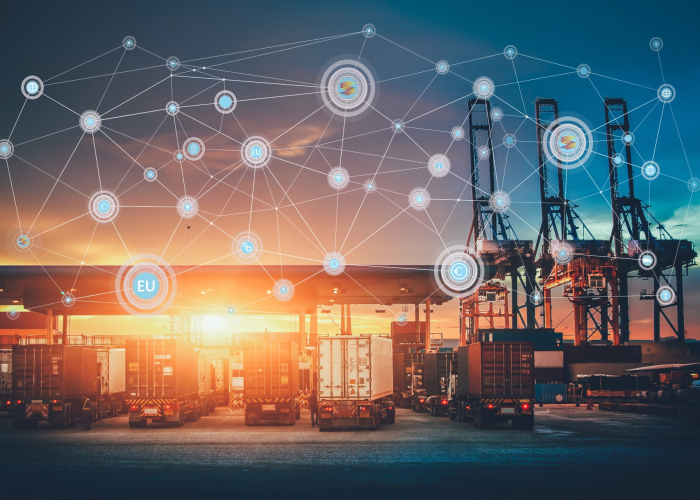 Last year, with a subsidy from the European Union, Simacan launched an ambitious growth programme called Simacan LINK, the driving force behind our company's further international expansion. The aim is to play a greater role in the digital transformation that shippers and carriers in transport and logistics are facing. An update on the progress.

Simacan LINK focuses on those platform developments that truly revolutionise the existing information provision to transport company drivers. The programme meets the need - together with technology partners - to exchange even better and adequate information: not only between shipper and receiver, but also to the drivers in the cabin to ensure safe and efficient transport.

Our European project is now at its halfway stage in early 2021. A year ago, Simacan was awarded a grant by the European Union for the Simacan LINK project. The mantra of European projects and requirements for funding is 'do what you promise and prove what you have done'. Therefore, it is now time to take stock of the interim: what have we accomplished so far and what do we expect to accomplish in the coming year?

Simacan LINK, how it started

The Horizon 2020 programme of the European Union is the financial instrument of the Innovation Union, the flagship of the Europe 2020 strategy, for ensuring global competition. This instrument is intended for innovative small and medium-sized enterprises with pioneering concepts, which can shape new or existing markets in Europe, as well as worldwide.

Horizon 2020 aims to make transport in Europe more efficient and cleaner. The committee saw the value of the Simacan proposition and selected it from 2,000 other proposals. Simacan will use the grant, of over 2 million euros, to scale up the Simacan platform to a European Connected Transport platform. This brings efficient and sustainable transport within reach of a growing number of companies that deal daily with capital-intensive and extensive, but also time-critical transport operations.

With the support of a number of leading retailers, transport companies and technology partners, Simacan wants to take its research and development of recent years and European transport management to the next level. This includes names such as Ahold Delhaize, Peter Appel Transport, Cornelissen Group, TomTom, Trimble and Optimizers.
Digital tooling that was available last year in this process often only partly met the demand in the chain. Often, these platforms are not, or only partially, able to integrate with other platforms. However, transport companies, retailers, technology partners and other clients operate in complex heterogeneous environments where mutual cooperation and interaction with existing systems is a requirement. The Simacan platform has demonstrated its ability to facilitate this cooperation.

The focus of the European project is on platform developments that revolutionise the provision of information on existing systems in vehicle cabins. This is where a large part of the profit lies for customers and users of the Simacan Platform.

The following project results aim to innovate the platform in such a way that both the organisation and the software are ready for scaling up. We have promised:

Running successful pilots with partners in countries such as Belgium, Denmark, the United Kingdom and Germany is also part of the objectives. This year, we have developed and implemented the preconditions to make this happen. Where are we now and how will we measure our progress on these aspects next year?

Let's start with eCMR. For this we have decided to work together with eCMR provider Transfollow for the first steps towards 'paperless and contactless' transport in retail. Parties agreed to connect their European logistics platforms for transport execution. The solution is based on the operation of Ahold and its partners.

It has been a great challenge to align the different stakeholders involved in this function, such as drivers, carriers, shippers, eCMR providers and the legal sector.

Everyone in the supply chain is now supported. The driver can show the eCMR; the shipper and the carrier can issue the eCMR. And when a journey starts while the eCMR data is missing, an exception is made in the Simacan Control Tower. This way it can be solved quickly.

The fact that customers manage their own users and accounts gives them flexibility. In addition, Simacan charges per stop and not per user, as many other SaaS platforms do.
The set of functions in the Simacan Control Tower that supports this functionality is called the 'self-service portal'. This makes us happy, since 50% of the tickets handled by support are about user accounts. We want to involve as many stakeholders as possible in data sharing and therefore do not impose any restrictions. In that case, it is also useful if customers themselves can issue new accounts to relations, so that they can also look at the data.

The implementation is expected to be tested in the first and second quarter of 2021 with Cornelissen's POLAR Express frozen transport arm. This involves cross-border transport between Italy and Poland.

Ahead in future logistics

Our rebranding and tagline 'Ahead in the future logistics' marked the beginning of a European branding campaign in 2020. So far, we see that the number of website visitors from outside the Netherlands is indeed increasing. We have changed our communication from Dutch to English, invested in communication capacity and are looking forward to a webinar series on 'Rethinking the transport supply chain'.

Finding customers and prospects outside the Netherlands remains a challenge. The Covid developments are slowing down activity and our prospects are very busy processing the increased demand. But this also offers opportunities. European shippers and carriers will want to see proof that our solutions help them become more efficient. Earlier this year Simacan welcomed Mike Exley as U.K. Associate Country Director. He will support us in the expansion of our services in the UK and EU markets.

Want to know more about Horizon 2020 and Simacan LINK?

More information about the European project Simacan Link, for which we received a grant from the European Union, can be found on our website.