solutions for the Retail sector

Keep your loyal customers happy at all times

Loyal customers are most profitable for your business. Keeping them happy means you have to reach and inform them in all possible ways, at all times. You need to provide them with the best possible delivery experience to ensure that the customer always chooses you. With Simacan, you win!

Update your digital assets across internal and external systems and start working together.

Eliminate distractions. Receive automatic updates and configurable alerts when service levels are at risk. Connect all platforms to give everyone in the supply chain the power to anticipate unexpected changes. Find the quickest, safest and most accurate route to ensure full shelves and happy customers.

With Simacan you can create a realistic plan for the whole transport fleet, with a smaller staff than before. Discover and recognize patterns in supply chain data algorithms that enable continuous improvement. Optimize your transport planning by using congruent, unambiguous analytics of transportation operations based on business intelligence.

Improve warehouse productivity and save hours of waiting time for your drivers. New innovations such as paperless transport can easily double the time savings and hence reduce costs! With Simacan you ensure on-shelf availability of goods as cost-efficiently as possible.

"With Simacan we now have an optimal insight into our supply chain. Our consumers receive accurate delivery information well in advance."

"With Simacan ordering groceries online became easier. Customers know exactly what time they should be home and no longer have to wait for the delivery man."

Hi, Carlo! Welcome to Simacan. Would you like to introduce yourself?
I'm Carlo van Overbeek, newly hired at Simacan for AWS infrastructure. Next to IT my biggest hobby is board games. At the moment I play a lot of Gloomhaven. Other games Iplay a lot are Ricochet Robots and Game of Thrones: The Board Game. These are all fairly complex games, but I also like simpler games like Star Realms, Poison and Tai Pan. Every once in a while I do ballroom dancing with my wife, to get out of my head.

Of course, we had hope that everything would be back to 'normal' again by now, but that is not the case, so you also joined us in these crazy times. How were your first days?
My first few days at Simacan were office days, because I find learning to work with new people is a bit easier in person. Of course it was very quiet here, but the atmosphere was still very welcoming. A lot of people spontaneously spoke to me for a first chat and I wasn't immediately overwhelmed with assignments in which I had to prove myself. The very concrete communication style within Simacan also appealed to me.

Tell me, where did the working life start for you?
After long doubts between computer science and chemistry, I finally opted for the latter. Igraduated in chemistry with great pleasure and eventually even obtained my PhD, although with less pleasure. I didn't want to go any further in academic chemistry and decided time to give IT a chance. Because I didn't know what I wanted in IT, I started as a trainee at Calco. They outsourced me to the central IT department of Nationale Nederlanden as DevOps AWS infrastructure. No idea why they matched me with that, but I really liked it! After my traineeship I thought it was time to move on. I updated my LinkedIn profile and came in contact with Simacan via a recruiter. Simacan really appealed to me, because it is a small organization, which already makes life easier for a lot of people without them realizing it.

And what will you be doing at Simacan?
I'm going to manage the infrastructure within Simacan, together with Bob and Tom. My main focus will be on the AWS Cloud part. I am very much looking forward to organizing the AWS infrastructure more tightly and clean, in order to make it more scalable. I am also curious what I can learn from Bob and Tom about IT infrastructure outside AWS.

Do you have anything else you want to get of your chest?
Not exactly off my chest ?, but I still have some old furniture that I want to get rid off, so first come, first served. 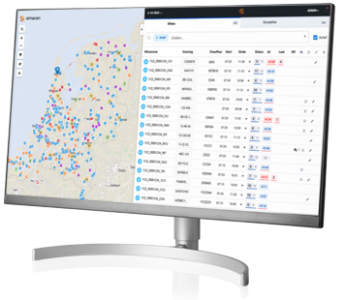